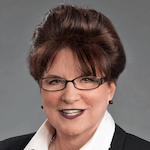 Patricia Gibson, MSSW, DHL, ACSW is an Associate professor in the Department of Neurology at Wake Forest University School of Medicine where she provides individual, group and family counseling and is actively involved in medical student, nursing, patient and community education. She also serves as Director of the Epilepsy Information Service, a nationwide telephone information line for patients and their family members in operation since 1979.  Ms. Gibson received her Masters of Science in psychiatric social work degree from the University of Tennessee. In 2012 she was awarded an honorary Doctorate in Humane Letters from Queens University in Charlotte, NC.

Ms. Gibson has organized and conducted numerous state, regional, and more than 40 national and international conferences on epilepsy.  She set up the Epilepsy Medication Fund for the state of North Carolina in 1987 and conducts numerous fundraisers for this Fund.  She has received national and international awards for her work to improve the care of those with epilepsy. She presently also serves as the volunteer Executive Director of the Epilepsy Alliance North Carolina.

LEARN MORE FROM PATRICIA GIBSON
Check out this fabulous podcast featuring Patricia Gibson about gathering information, accessing care and ‘finding your tribe’ in the world of epilepsy.  The podcast was recorded by Cure Epilepsy in March 2020.
CURE Epilepsy Podcast: No One Does it Alone: Finding Support to Navigate the World of Epilepsy Care featuring Pat Gibson